Available in e-book and paperback.
Kindle

Maggie York, a convent-raised foundling, knows the Duke of Dunwoody’s sexual tastes are a shade or two darker than normal, but marries him anyway—partly because she has no other prospects and partly because, try as she might, she can’t seem to exorcize her desire for the dashing ducal devil. Two years ago, she watched him swive and spank her lady’s maid, luring her from the garden of innocence into the orchard of fleshly delights–and she’s been hungry for more ever since.

Robert Armstrong, the duke, is a Roman Catholic whose extreme devotions as a child warped his desires as a man. He’s also a slave to the times in which he lives–and to his king. Everything he is, everything he holds dear, depends on staying in Charles II’s good graces. Unfortunately, Maggie isn’t the bride the king selected for him. Now, to make amends, the duke must choose between the lesser of two evils: whore his wife or be reduced to a penniless commoner.

Whose interests will Robert choose to serve, his own, the king’s, or the woman he loves? 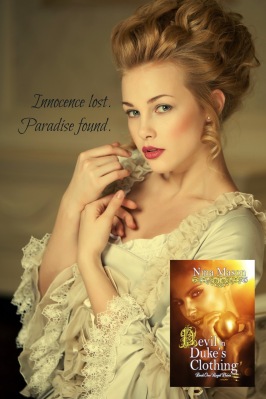 The duke pushed the sleeves off her shoulders and halfway down her arms before about-facing her. Stooping, he pressed his mouth to her décolletage.

His lips were deliciously warm and moist against the bulging tops of her flattened bosoms. His hair tickled her flesh in a pleasing sort of way and smelled faintly of lavender.

He moved upward, kissing her collarbone, her throat, the side of her neck, and her earlobe. After blowing in her ear, he whispered in a voice like velvet, “Why did you marry me, knowing what you knew?”

A hot lump formed at her core. “Because.”

He ran his tongue around the folds of her ear, sending delicious shivers through her. “Because why?”

“Because you are a duke.” Mouth suddenly parched, she licked her lips.

“And you dreamed of being a duchess?”

“I would prefer not to say.”

“Because it will make me sound small and petty.”

His tongue’s explorations undermined her concentration. “Now I really must know.”

She heaved a sigh of surrender. “Survival, “ she said, forcing the half-truth from her throat. “Since you insist upon an answer, I married you because you asked me to…and I had nowhere else to turn for protection.”

His mouth returned to her neck and proceeded to kiss, lick, and nip her flesh, turning her insides to syrup.

“Thank you,” he said betwixt kisses.

Guilt crushed her chest like a boulder. Yes, she’d married him to gain security, but she’d left out the part about lusting after him deep in her heart. She moved away, removed the full-sleeved bodice, and laid it over the bench at the foot of the bed.

He came up behind her, slipped his arms around her waist, and kissed the back of her neck, setting her aflame.

She spun in his embrace and looked at him. His dark hair tumbled in soft waves over his broad shoulders. His features were shadowed, making him look dangerous. The need she’d stuffed down for so long erupted from her core, thick and molten.

Bringing his mouth to hers, he kissed and nibbled her lips as his hands untied the strings of her petticoat. It billowed to the floor, leaving her in only her fancy wedding stays and shift.
“Now, ’tis my turn.”

Stepping back a wee ways, she pulled the diamond stick-pin from his cravat, loosened the knot, and unfurled the long strip of linen encircling his neck. Was it the same one he’d used to tie the maid’s hands?

“Why did you dismiss Mistress Honeywell?” she asked, letting his neck cloth slip from her fingers to the floor.

His beguiling mouth hitched into a crooked grin. “Had I known you’d seen me swive her, I could have saved myself the trouble—and a few sovereigns.”

“I’m sorry for your trouble, but do not regret her loss. Truth be known, I never liked her—though I do not doubt part of my aversion stemmed from what I witnessed.”

He lifted her chin, pulling her gaze to his. “Were you jealous, Rosebud?”

“Not at the time, but afterward, I resented her relationship with you.”

“There was no relationship. ‘Twas merely a one off.”

Unsure what to say in response, she unbuttoned his collar, opened the front of his shirt, and slipped both hands inside. As her fingertips met the warm, hair-garnished flesh of his chest, she nearly swooned.

How many times she had fantasized about touching him in this way. How much better he felt in real life—a pleasing quilt of smooth skin, solid bone and muscle, wiry hairs, and petal soft nipples. She pinched one until it grew erect.

“You feel good, husband” she said. “You are well put together.”

“It gets better.” He laughed.

“I know.” She blushed at the memory. “I saw everything you own that day in Mrs. McQueen’s closet.”

“And you married me anyway?”

The smile he gave her warmed her all the way down to her toes.

She swept her hands downward, shuddering when they touched the tartan draped around his hips. The wool was finely woven, soft. She brushed the apron, pleased to find he was aroused. So was she. Mightily.

Since that day in the closet, she’d pictured his hard phallus a thousand times—in her hand, her mouth, and her cunny, and now ’twas at last within grasp. She bent to unbuckle the belt circumnavigating his hips, but, changing her mind, reached underneath the curtain of plaid instead.

He sucked in a breath as she ran her hands up the backs of his thighs. They felt exactly as she’d dreamed they would. Lean, hard, and flocked in bristly hair. Would his phallus feel the way she’d imagined, too?

Nina Mason is a hopeful romantic with strong affinities for history, mythology, and the metaphysical. She strives to write the same kind of books she loves to read: those that entertain, edify, educate, and enlighten.

When not writing, she works as a communications consultant, doll maker, and home-stager. Born and raised in Orange County, California, Ms. Mason currently lives with her husband, teenage daughter, two rescue cats, and a Westie named Robert just north of Atlanta, Georgia.

Here are the author’s stalker links: