Conn had spent the millennia of his life fighting alongside his brethren as a Guardian of the Four Realms. He’d never allowed himself to imagine that he would be gifted a mate but her scent was inside him now. The intoxicating lure incited his wolf to track her and claim her in a sexual frenzy she could never deny. He refused to repeat the mistakes his brothers had made in their unions, instead he planned to fight the demands of his beast and tempt his female.

Dacia had spent the years of her life as a guardian of her family’s secrets. Her days were consumed with helping her siblings search for the Immortals who had escaped the God Apollo’s brutal training camps with her parents thousands of years ago. They were the only hope of finding answers to questions about their lives. Questions her parents hadn’t resolved before their deaths.

Not in her wildest of dreams would Dacia have imagined the answers would instead find her. Or what form those answers would take. The breathtaking male who stepped out of the night and into her life was certainly not one of the hidden Immortals her parents had told of, he was so much more. Wielding both immense power and thrilling strength he aroused not only her body but the wolf hidden within. Dacia needed to find a way to trust her seductive Guardian, not only with herself, but with her family as well. But how long could she hold out against both the intensity of the mating frenzy that demanded sexual release, and the wickedly sexy male who was tempting not just her body… but also her heart?

Warning: This book is intended for an adult audience. It contains explicit sex; voyeurism; dirty talking males with bad language.

A delicious edition to the Guardians of the Realms series that started out with a bang and kept on going. I normally get frustrated when a book takes a while for the consummation of the relationship but the buildup was so hot and erotic that I didn’t mind a bit. Conn is as hot as they come and I really like him. I’m glad that Dacia was a good fit for him. As for the story, there wasn’t as much intrigue and battles as some of the other books but I didn’t even realize it until late in the story. I think that was due to learning about Dacia, her family and where this may all lead. Despite a few typographical errors, this was a fun, hot and engaging book.

Note: There were a few typos in this review copy, but edits will be made before its published. 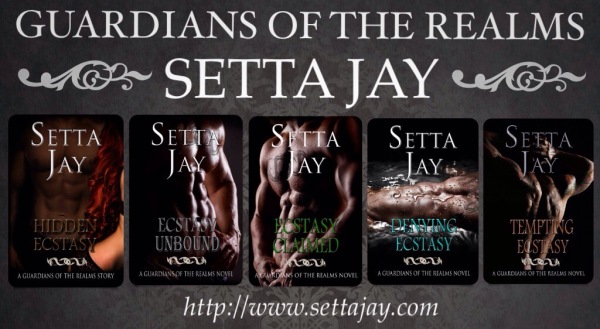 ✦FACEBOOK EBOOK GIVEAWAY✦ Tempting Ecstasy (A Guardians of the Realms Novel #4) by Setta Jay
Ebook will be gifted on release day 9/30 and paid for by Reading In Pajamas.
✦Enter on FB post: http://fb.me/71cTBETEU

The sad truth is that I’m not nearly as entertaining as fiction. *Wink* I am a thirty-seven year old stay at home writer, thanks to my incredibly supportive husband. We’ve been together for thirteen years and I still love waking up next to that sexy man. We lost our furry child recently, so we are childless at the moment. Our whole world revolved around her. Needless to say, I love animals, especially dogs. Okay, maybe not all animals, I’m not a super big fan of monkeys. Any animal that throws their feces kind of eeks me out. I may, or may not, have a problem with candy. I love any research that leads to Neiman Marcus’ online shoe department. Spreadsheets give me way more happiness than they should. I love to read, the dirtier the better. It all started with the naughty historical romances by Judith McNaught that I devoured as a teenager. I love reading about hot, sexy alpha males and heroines that are smart enough to live.