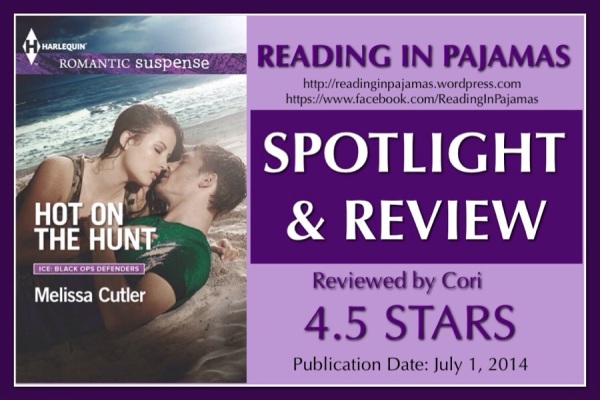 Black-ops agent Alicia Troy spent years plotting the perfect revenge on the man who left her for dead…until her plan is foiled by her ex-teammate–and ex-lover–who taught her the meaning of betrayal. She can’t trust John Witter…so why can’t she stop wanting him?

For John, it’s a race to get to Alicia’s intended victim before she does because he’s the only one who can prove John’s innocence, but the race turns into a battle of wits against the woman who believes he deceived her. But when their former agency turns on them both, labeling them “armed and dangerous,” John has a new mission: keep his woman alive.

I love this series! It keeps getting better and better! Great romantic suspense with lots of action, drama, emotion and steamy romance. It kept me on edge and flipping the pages to see what would happen next. I love a good suspense that includes a great love story! I loved the characters and the plot. Melissa Cutler writes a story that really makes the reader feel like they are living the experience with the characters and rooting for them. I highly recommend this series and this book for romantic suspense lovers. Melissa Cutler has become a go to author for me when I’m in the mood for a suspense filled romance.

Melissa Cutler knows she has the best job in the world, dividing her time between her dual passions for writing sexy small town contemporary romances, western romances, and edge-of-your-seat romantic suspense for a variety of publishers, including Harlequin, Kensington Books, Penguin, and Macmillan. She was struck at an early age by an unrelenting travel bug and is probably planning her next vacation as you read this. When she’s not globetrotting, she’s enjoying Southern California’s flip-flop wearing weather and wrangling two rambunctious kids.