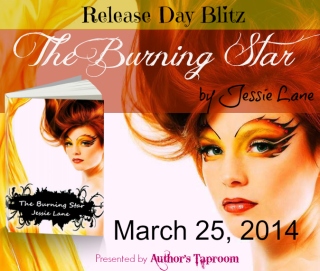 Love fantasy? The paranormal? Romance? How about a twisty-turny story featuring two young women in the fight of their lives? Yes?! Then we have the book for you! Pick up Jessie Lane’s THE BURNING STAR, available today! Learn more about the book below and be sure to enter the author’s amazing giveaway while you’re at it! 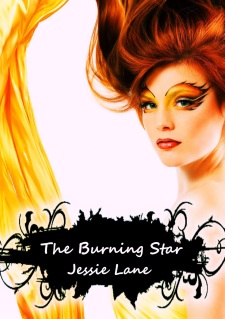 *This book is a re-release and revision from the original book. Please be aware that some things have been added, deleted or changed.*

Kay’s journey of a lifetime started in the woods outside of Asheville, North Carolina. It was there that the 17 year old met a beautiful man along with a monster. The chance encounter led her to an unbelievable world that shouldn’t exist; a place where myths and fairy tales were real, and in some cases, deadly. Kay knew she would have to brave this new world if she hoped to find a cure for her terminal cancer.
With a strange yet beautiful cast of characters that she would meet along the way, Kay uncovered truths that would change her life forever. However, before it was all over, it would become clear that Kay wasn’t the only one with problems.
Yet another 17 year old young woman was fighting for her freedom and her life.
Kira had lived in a magical world that Kay had only dreamt of. Despite this, her life had not been filled with many good things. As a matter of fact, she considered her empty, emotional solitude the only positive aspect of her life. She fought daily battles to escape abuse and torture.Trained to be an expert assassin, she was charged with kidnapping Kay and delivering her to Kira’s master, Lord Donovan.
As the two young women set forth in their journeys, their paths would cross in unimaginable ways. The only question that would remain was who would come out alive and whole in the end?

WARNING: This is a upper ya/young adult/new adult fictional story that includes some explicit language, graphic violence, and mild sexual situations. Recommended for ages sixteen and up.

THE BURNING STAR will be released at 99 cents, but that’s only for a limited time! Then it’ll go back to its regular $3.99!
Amazon | Barnes & Noble | All Romance/OMNI Lit | Kobo

Excerpt:
I stood there frozen, knowing that I would probably die because of this wretched creature, when all of a sudden I saw the quick movement of an arm bringing down the point of the knife, slicing towards the large creature’s skull. The animal’s enraged screams ripped through the woods surrounding us.
My brain tried to analyze what was happening before me as I stood still as a statue and watched as the monster started to crumble away like something that had been burnt from the inside out and then fell apart.
This can’t be real.
I looked up from the ashes into the face of an angel.
He’s not an angel; he’s just a guy. Right?
He was staring at me as if he had just seen me sprout a second head. I was staring back at him like he was somehow related to those alien birds outside my window. My mouth flapped open to scream again, but before a sound could escape, the world faded to black, and I fainted.
At least I didn’t scream again.
When I opened my eyes, two ethereal blue eyes were staring back at me. My head was throbbing like a bass drum in a marching band, and it felt like my head might split in two from the pounding headache.
“Are you okay?” he asked me, his voice strong but sweet.
Before I could stop my mouth from saying anything ridiculous, I replied, “Are you an angel? Did I finally die and go to Heaven?”
He bellowed a laugh while I blushed a shade that was more than likely lobster red. I smacked myself in the forehead and tried to hide my face behind my hand. What a brilliant way to make a first impression on an extremely hot guy. That’s when it hit me.
The past few moments of events flooded my brain again and I started to panic.
“Wait a minute! What was that thing and how in the world did it just, just—”
“The dog? I had to cut it with my knife to scare it away. It wasn’t a mortal wound though. He took off through the woods to escape. Sorry if you’re one of those animal lovers, but I was afraid it might kill one of us.”
I shook my head to try to clear it. “No, no, no, no. That was no dog. Well, it was at first, but then it became something else. It was black and huge and had those red eyes…”
Before I finished my sentence, I looked up at him to see complete shock and amazement on his face. I had never seen anyone look so bewildered.
“Don’t look at me like that! I know what I saw! Now what was that thing and what happened to it? It didn’t run off; I saw you kill it. And I would point to the body to prove it, but it, well, it fell apart or something.”
In a split second, the shock had disappeared from his handsome face, replaced by something more masked and calculating. “I’m sorry, but you’re quite mistaken. I didn’t kill it. I only wounded it. And it was a dog. Are you sure you didn’t hit your head or something? I’m afraid you might be having some kind of hallucination.” Somehow, when he said it, it didn’t seem as scary or grotesque as it did when I played what I saw back in my head.

Crystal and Melissa often live half their lives with their heads in the clouds dreaming of alpha military hunks, werewolves and kick ass heroines crazy enough to chase after creatures that they unquestionably should know better than to chase.
Their first YA novel, The Burning Star, was released in May 2012. Big Bad Bite is their second novel, but their first adult paranormal romance. They are now working on their next two novels, Walk On The Striped Side and Secret Maneuvers. With these projects underway, they are looking forward to showing the rest of the world their crazy stories, heroes and heroines that often plague their minds until written, and hope you will join them on their journey!

One thought on “Release Day Blitz & Giveaway: THE BURNING STAR by Jessie Lane”