Your hearts were swayed, and your votes were counted.
Now, Anna’s decision is revealed in the conclusion to this uniquely enthralling series.

Joaquin Delacruz never thought he’d see the day when he’d beg for the FBI’s help—especially when that involved working with Special Agent Grayson Sloane. And Gray is no more eager to work alongside the criminal who stole Anna’s heart and exposed her to his dangerous world.

But with Anna held captive by a lethal enemy, Joaquin and Grayson will need to set aside their jealousies or risk losing the woman they both love.

Emotions are bound to explode, with near-catastrophic consequences. By the time Anna realizes which man truly owns her heart, body, and soul, it may be too late to save him…

I really enjoyed the danger and action packed in to this story. It worked nicely with the inner turmoil of Anna being torn between the two men she loves. I for one would be hard pressed to choose between the two and like them both. I am still on the fence as to how I feel about Anna. I wished I could have gotten closer to her. But that being said, it was a quick, exciting and sexy series that I enjoyed reading. 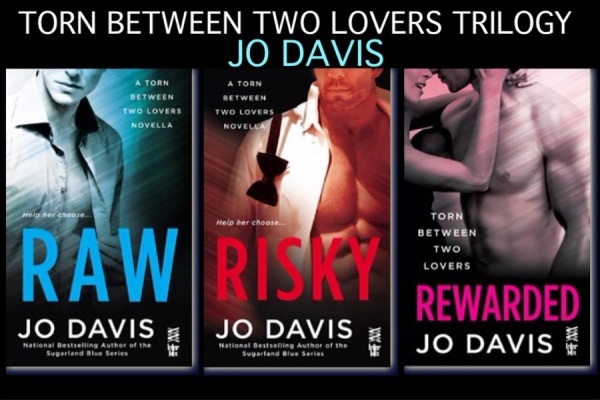 TORN BETWEEN TWO LOVERS is a gripping and sexy romance trilogy with a unique twist: Our heroine needs your help to decide who wins her heart… RAW introduces this sizzling new series, in which two enticing men will vie for Anna’s heart—culminating in a choice that will be determined by reader vote!