DINM’s destruction has made Jade’s team invincible in the eyes of every other Doppelganger, giving Adrian and Joanna the chance to finally prove themselves, explore the terms of their new contracts and the tempestuous relationship brewing between them.

Both have secrets, nightmares, memories that would be better off buried in the past and people they wish they could forget. Joining together might just give them the redemption they both so badly crave. But with an overprotective brother and a newly found Fettle DP that has sent Joanna’s emotional control into turmoil, it’s unclear whether they even stand a fighting chance.

Then there’s the trouble boiling within the government’s own four walls as the treasury continues to be drained with a never ending list of unaccounted expenses, disappearing without a trace. Adrian is enlisted to ghost the perpetrator with his Orb, and Joanna’s help.

Their progress is stunted before it can even begin, their contracts ripped away from them as the team realise that the aftermath of DINM reaps more problems than rewards. When the minister they’ve been shadowing inadvertently introduces them to a man both Adrian and Joanna recognise, their dark pasts become entangled in a twist of fate none of the team saw coming.

This is the second book in A.G. Chamber’s Jaded series. It is a young adult series with a science fiction twist about a team of assassins and their doppelgängers. I recommend reading Jaded Rein before reading Jaded Youth to understand the back story. I read both books back to back and they kept me on edge and turning the pages to see what what happen next. A G Chambers creates a vivid world and characters that draw the reader into the story. Jaded Youth is full of mystery, suspense, intrigue and great characters. Jaded Youth is focused on Adrian and Joanna’s growing relationship and establishing their roles on the team. Suspenseful science fiction story with a good plot. I recommend this book and this series for science fiction lovers. 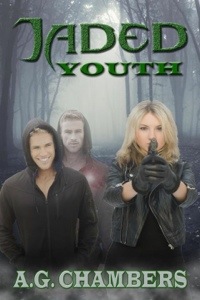 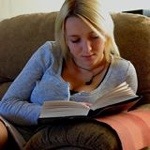 A G Chambers is the author of Jaded Rein, the first in a five novel series about the world of Doppelgangers, having to clean up the government’s messes over a new genetic development they don’t know how to handle.

Split between UK and New Zealand, A G Chambers has always had a passion for writing with her first short story at 8 years old, ‘Chocoblock’ and poem ‘Seasons’. From there she was nominated in the top 10 novelists at 12 years of age for her short story memoir, which featured a doughnut eating horse and has since gone on to publish her first novel, Jaded Rein, at 18. Funnily enough, she almost failed her second year of English and spent a considerable amount of time debating whether or not she wanted to be a chemist before she became a Publishing Assistant for The University of Law in London.