Under Your Skin  (For Your Love #1) by Shannyn Schroeder 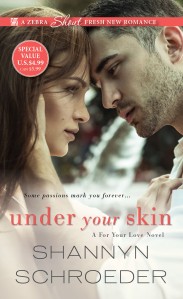 Blood Is Thicker Than Ink. . .

Norah O’Malley has been alone for a long time. It’s been ten years since her father and four brothers shipped her off to be raised by her aunt. Seven months since she’s seen the guy who got her pregnant–who still doesn’t know. And it’s two weeks since she came home to Chicago and discovered none of her family wants to talk–or listen.

She never expected to walk into a tattoo shop seven months pregnant and get her socks knocked off by instant attraction. She can’t even see her socks. But Kai Ellis is big and gruff and sexy as hell, and if he has a past, well, so does she. Even more, Kai knows how to listen so that Norah feels just a little less alone . . .

All the chemistry in the world can’t help Norah make her decisions. And no sizzle of desire will make Kai believe in happy endings. But a little time with someone who understands might just change everything . ..

“Before you leave, can you start a load of laundry for me? I don’t think Kai would feel comfortable touching my unmentionables. There’s a small basket in my bedroom.”

Norah narrowed her eyes. Although she hadn’t gotten a grand tour of the house, she hadn’t remembered seeing a washer and dryer either. “Where are the machines?”

“Okay. I’ll start that and then go to the store.” Leaving her purse on the chair, she gathered the dirty laundry and found the door leading to the basement. She picked her way down the wooden steps carefully. A bare bulb dangled at the bottom lighting her way. A clink caught her attention. This was like a scene out of a bad horror movie.

She pushed on. At the bottom of the stairs, she saw the source of the noise: Kai lying on a bench lifting weights. He was shirtless. His bronze skin glistened with the effort of his workout. He continued to lift the bar and his arms bulged and flexed. A tidal wave of testosterone crashed through the room and into her.

She swallowed hard and moved another step before he caught her staring. Then she saw he had earbuds in, so he couldn’t hear her. She moved as silently as she could to the washer. A loud clunk made her jump and she dropped the basket. Turning, she saw Kai sitting up.

He yanked the earbuds from his ears. “What are you doing?”

Her heart thundered. “Your mom asked me to do a load of laundry.” She pointed at the basket at her feet as if he didn’t know what dirty clothes looked like.

He stood and walked toward her. A patch of dark hair rode across his pecs. She stared at his body as he moved. Tattoos decorated his skin. Across his ribs, on his upper arm, his shoulder. Without looking, she knew she’d find more on his back.

Standing in front of her, he was close enough that she could trace a bead of sweat that trailed down into the waistband on his shorts. His breathing was slightly faster than normal. At least he had the excuse of lifting weights. All she’d done was walk down the stairs and ogle him. He bent and she shivered as his body lowered.

He grabbed the basket and held it to the side. She tilted her face up. He stared into her eyes, but then his gaze traveled over her whole face, landing on her mouth. The look was so intense that she could almost feel the phantom pressure on her lips.

He jerked back. “You shouldn’t be carrying this. You’re pregnant. It’s not part of your job.”

God damn she hated hormones. She’d almost had herself convinced he was going to kiss her. All he really wanted to do was yell at her. Typical.

She inhaled deeply. Then she snatched the basket from his hands before speaking. “You hired me to take care of your mom. She asked me to do a load of wash. This basket weighs less than the groceries I carried in yesterday. I’m fine.”

Turning her back to him, she walked to the washer and started dumping clothes in. She couldn’t wait to have this baby so she could have her body back. She’d never had a problem controlling her hormones around guys. If she was attracted to a guy, it was usually mutual. There were signals, for crap’s sake. This whole pregnancy thing threw everything out of whack.

Even now, as she messed with the dials on the washing machine, she felt like he was staring at her. When she turned, he was.

“I’m not trying to be an asshole. I don’t want you to hurt yourself or the baby doing stuff around here.”

“I’m fine. I don’t overdo it, which should be evidenced by the fact that I fell asleep on your couch last night.”

“Okay. You know what you’re capable of. Don’t do too much on account of us.”

His words did all sorts of new things in her. To have a man trust that she was smart enough to take care of herself meant something. He didn’t view her as a weak, inferior being as she often felt her brothers did. She smiled. “I’m going to the store. You want me to get you anything?”

“Nah. I’m good.” He returned her smile and the tension between them dissipated.

“I’ll be a while since I have to go get books for your mom too. Do you know what kind of books she reads?” She didn’t know why she said it, but her mouth got away from her.

He shook his head.

“She reads romance. And not the longing looks from across a ballroom and maybe some hand-holding kind either.” Norah leaned a little closer and lowered her voice. “She made me read a sex scene to her last night.”

The look on Kai’s face was priceless. Even under the golden hue of his cheeks, a blush rose. “Christ, I’m sorry.”

Norah bent over on a peal of laughter. “If you could see your face . . .” Those were the only words she could handle because laughter stole her breath. She laughed until tears streaked down her cheeks. Her stomach grew tight and a little uncomfortable, so she straightened. Rubbing both hands on her belly, she took slow, deep breaths. “Sorry. I just had this image of her asking you to read to her before bed.”

In truth, the deep, rumbly sound of his voice would be enough of a turn-on regardless of the words he read. Suddenly, she wanted the audiobook of that. 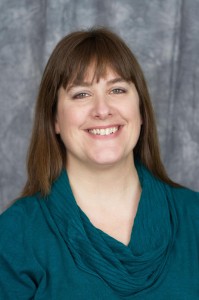 Shannyn Schroeder is the author of the O’Leary series, contemporary romances centered around a large Irish-American family in Chicago and the Hot & Nerdy series about 3 nerdy friends finding love. Her new series (For Your Love) will release this summer with the first title Under Your Skin. When she’s not wrangling her three kids or writing, she watches a ton of TV and loves to bake cookies. Find out more at: http://www.ShannynSchroeder.com

2 thoughts on “Blog Tour, Excerpt & Giveaway: Under Your Skin  (For Your Love #1) by Shannyn Schroeder”