She sacrificed everything to keep him safe…

He’ll risk everything to have her again…

Now Sawyer has found her, and he has an indecent proposal: submit to him for seven nights and he’ll grant her the divorce she desires. Forced to pretend she no longer loves him, each night spent in his arms is exquisite torture as they reignite their intense passion through role play and ménage. But when a deranged killer out for revenge targets Lisa, she must finally trust Sawyer with the secrets of her past…or neither of them will live to see the future.

Lisa turned and caught sight of Rachel walking toward her with two men by her side.
It took only a moment for it to register.
The long blond hair she loved to tug on during rough sex.
The stubble lining his jaw that used to scratch the skin of her inner thighs as he worked her over with his mouth.
The roguish and lighthearted appearance he maintained in public and the dark dominance that lurked beneath the surface.
It was him.
He was here.
Her Master.
He had found her.
She blinked a few times, trying to see if maybe she was imagining that the man she’d run from four years ago was suddenly only feet away and talking with her friends as if he knew them. That was impossible, right?
Her heart galloped a wild beat, and the sounds of the crowd disappeared under the roar of her pulse.
She wanted to run from him.
She wanted to run to him.
All the sorrow and regret she’d buried deep down inside came rushing back with a force that nearly bowled her over. And when the ghost from her past stood right in front of her and looked at her like a stranger, the glass of red wine slipped from her shaking hand onto the green grass, the liquid pooling beneath her heels.
Seemingly oblivious to her shock, Rachel smiled, a twinkle of mischief in her eyes. “I’d like to introduce you to Logan’s friend, Sawyer Hayes. Sawyer, this is Lisa Smith.”
Logan’s friend? Sawyer was Logan’s friend? This was the man who had helped Rachel and Logan in Las Vegas when they were framed for murder and running from the FBI?
“Hello,” Sawyer said cordially, standing so close she could feel his body heat radiating off him and smell a scent that reminded her of the best days of her life. “It’s nice to see you again, Annaliese.”
Her mind was a jumbled mess.
Like she was prey caught in the sights of a hunter, she became entrapped in his eyes.
She couldn’t breathe.
Couldn’t speak.
Couldn’t move.
“You know each other?” Rachel said, her brows wrinkled in confusion.
“You could say that,” Sawyer said slowly, still holding Lisa captive with his eyes. “She’s my wife.”
“Lisa is the woman who conned you?” Logan asked incredulously.
Shame heated her cheeks, and she suppressed the threatening tears. Her friends would hate her when they discovered what she’d done. Not that she deserved any less.
And what did it matter? She was about to lose everything. She wouldn’t be surprised if she was arrested at any moment.
Rachel took her hand, but she still couldn’t look away from Sawyer. “I’m sure if she did, she had her reasons.”
Yes, she had her reasons. Dark, dangerous reasons that sometimes woke her out of her sleep in the form of violent nightmares.
And now with Sawyer’s appearance, her nightmares were one step closer to becoming true. 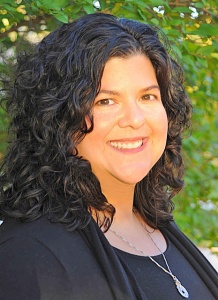 She began writing upon the insistence of her husband who dragged her to the store and bought her a laptop. When she’s not working her day job, taking care of her family, or writing, you’ll find her reading the latest smutty romance.
Shelly Bell writes the Benediction series for Avon Red Impulse and the forthcoming Forbidden Lovers series for Grand Central Forever.